MORTYFEAR, the chaotic Finns based in Seinäjoki are back to finally release the second studio album “My Dystopia” on July 15th via Inverse Records, and I must say I’m really surprised, after all, time has flown since the release of “God’s Skin” in 2006 and the name of the band disappeared from my radar since then, only in 2020 during the release of the first singles “Delete” and “Plastic World” they reappeared with a new structure, so obviously the curiosity about this new album just grew to the same extent that we slowly found a band developing in a much more chaotic sound than before, and this is really intriguing.

Founded in the late 90s by Tapio Laitila in Ostrobothnia, Finland, MORTYFEAR has accumulated some releases over the years but it was only in 2006 that the first full-length was actually released and in all this time the band went through a renovation in line-up before finally the work for a second album could be started, in all of this twenty-two years have passed but all this time contributed to a greater development of the sound of these musicians in a more chaotic and haunting direction, thus creating in addition an identity really strong for MORTYFEAR also a different story for each song in “My Dystopia“, for everything together connecting like a big picture.

Having previously flirted with death and thrash metal, MORTYFEAR always seems to want to break any gender limit and this new effort is not different, when I mentioned the word “chaotic” repeatedly in this review it is because this band really deviates from any standard and that you’ll immediately discover in “Circus Called Life“, a sharply shrill track using noisy keyboards that reminds me a lot of Sci-fi and horror movie tracks but at the same time interspersed with dissonant guitars before everything is pushed into guttural vocals cavernous and sinister and sarcastic support vocals. The sound is intense like watching a horrifying horror movie but at the same time deviating to more melodious frequencies of cleaner vocals that reminded me quite a few brief moments of “Slipknot’s insanity”, but of course with a much greater diversity of elements. “Jester’s Downfall” follows the same line but this time with more precise riffs and greater speed, it is chaotic, it is hallucinated, it is a track full of effects that resemble the laborious sound of old movies but it repeats a moment of melodious and melancholy calm full of an ethereal atmosphere and whispers encrusted in such a rough track, it’s like a box of surprises, you’re listening to something that stirs your senses in a mind-boggling way almost causing a certain irritability but at the same time it offers a certain unusual relaxation that comes up unexpectedly, so the band seems to offer much more than lyrics but also a game with your brain.

Needless to say, MORTYFEAR is not a band for everyone, or rather, the sound of this band is not for everyone, and I don’t say that for any denigrating reason but just because these musicians play a lot with experimentalism, which in fact it is not a bad thing in terms of music, after all the music itself comes exactly from the need to create something new and deal with the sensations and emotions, but while the whole scenario of the album fluctuates about a certain “insanity” on the other hand we find more gaps solid as “Black Noise” which is equivalent to some worthy releases of death and black metal but with hints of really unusual progressive elements. “Plastic World” will be another track as unusual as anything I’ve heard in the last few years, starting hallucinogenic but embarking on more melodic and cool layers that make this album almost unbelievable.

Enigmatic pianos open “Spoiled” and once again we hear heavy riffs playing with the genres while the vocals go from clean and low to robust gutturals, and all this interweaving of elements and genres will be repeated in “Misfortunate Phoenix“, “Delete” and “Dark Waters“, the latter with the addition of drums and soft female voices whispering as the album closes off like enjoying an exotic but absolutely tasty dish.

Mortyfear - My Dystopia review
Our conclusion
Do not be fooled by the apparent madness of "My Dystopia" for the first few seconds, within this album are some charades that can lead you to discover a little more than the typical mainstream metal offered in all corners, after all if what we are looking for is a differentiator then MORTYFEAR will certainly be.
8 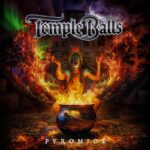