What made you want to become a musician?

Not sure actually, I think it was all about being creative as kid. I remember I had a huge urge to create, was it drawing comics or writing stories or playing guitar. i remember the first guitar I got at the age of nine or so and it was a never-ending instrument of joy. I still have some ”demo” tapes I made around that age with our little cassette-recorder. I always liked to create my own stuff, I actually never learned to play much of cover songs.

How would you describe your music?

I have different bands with different styles. From the old school thrash metal of Prestige to symphonic progressive metal of Imperia. These days I like to challenge myself to do better orchestrations. For me the music is always about transferring the emotions. I never was that much interested in technical snobbery as such. But yes, I play everything from thrash to symphonic or even pop music.

If you could change anything about the music industry, what would it be?

I think all the internet streaming has to come more fair to the musicians and composers.

What is the saddest song you’ve ever heard?

That is a good question! I am a sucker for melancholic sad songs so there are plenty of those. But I think the one that has made an impact and that I have performed live myself as a vocalist has been Hector’s Lumi Teki Enkelin Eteiseen – a Finnish classic.

What is your best music related memory?

There has been many such occasions, though said that the time often softens the hard edges of such memories. But for example the whole Inferno tour with Lacrimosa in 1995 was awesome and very successful, playing in Israel in 2000 with Ancient Rites was also something unforgettable, many Imperia shows have been highlights etc. I can’ t just pick one best memory.

What is the most useless talent you have?

What’s the best piece of advice another musician ever gave you?

Don’t think I ever got any advice in verbal form from any other musician, neither did I ever went to any musical education to learn any instrument. But I can tell you a story of the best advice in the form of gesture and behaviour. I remember we had a gig in Lammi with Prestige supporting YÖ, which was a very successful Finnish rock band. And we were just kids in 1989. In one song I broke a string of my guitar and did not have a spare, so I ran from the stage to the busses and Markku Petander – the guitarist of the headliner – asked me what is going on and I told him being sad that the gig is over. So he just handed me his vintage Fender Stratocaster and said to go for it, and I could finish the show with his guitar. Through the years I’ve been thinking this a lot and it has guided me unconsciously. To never let the piss get in your head, no matter how much of a star you think you are. I’ve done the same myself many many times later, so I take it as a very valuable gesture of an awesome musician.

Has there been one particular moment in your musical career that you’re most proud of?

Many. Every album is always a moment of joy and you are very proud of it. But of course releasing the first one has had the most impact in your life. Being a kid of barely 18 and holding the first LP in your hands is a memory you won’t forget.

What would you be doing right now, if it wasn’t for your music career?

Well I would be doing Artwork for other bands. Wait…

If you could live anywhere in the world, where would it be and why?

Finland is a greatest place to be, but the 17 years I lived in Amsterdam are a major part of my life. I love the city, the history and I have family and friends there. So one day I will return there I am sure.

We interview Finnish musicians and ask the same ten questions from everyone. There will be lots of unexpected answers! 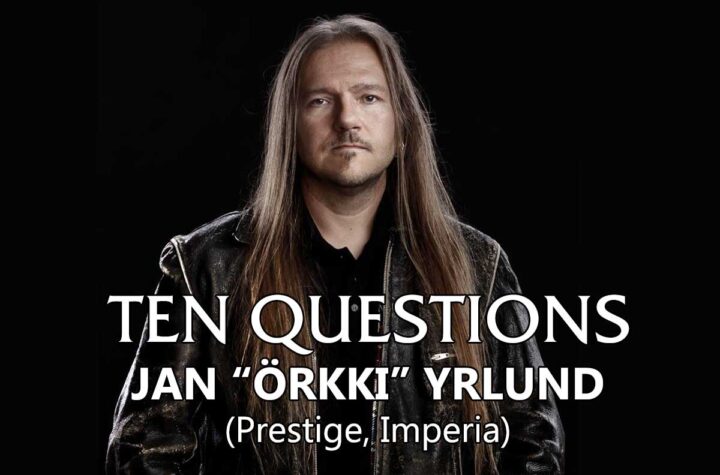